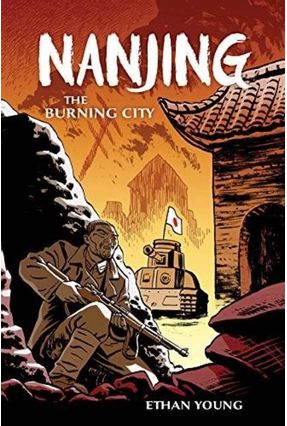 After the bombs fell and shook the walls of Nanjing, the Imperial Japanese Army entered and seized the Chinese capital. Through the dust of the demolished buildings, screams echo off the rubble. Two abandoned Chinese soldiers are trapped and desperately outnumbered inside the walled city. What they'll encounter will haunt them. But in the face of horror, they'll learn that resistance and bravery cannot be destroyed by the enemy. Ethan Young ("Tails") delves into World War II's forgotten tragedy, the devastating Japanese invasion of Nanjing, and tells a heart-wrenching tale of war, loss, and defiance. Beautifully illustrated in black and white. "In "Nanjing," cartoonist Ethan Young tells an intimate story against an epic landscape. Bold, heart-breaking, and gorgeously rendered.""-Eisner and Printz Award-winner Gene Luen Yang (Boxers & Saints, American Born Chinese)" "Haunting and powerful, "Nanjing" is a moving tribute to an event which needs to be remembered as much as we'd like to forget it.""-Eisner and Harvey Award-winning creator Derek Kirk Kim (Prime Baby, Same Difference and Other Stories)"
BAIXAR
LEIA ONLINE

Club Find many great new & used options and get the best deals for Nanjing : The Burning City by Ethan Young (2015, Hardcover) at the best online prices at eBay! Free shipping for many products! "Nanjing: The Burning City deserves a spot alongside not only historical comics, but wartime prose and non-fiction as well. It's not often that an author can so skillfully evoke powerful emotion while telling a complex and long-forgotten story and this book is an excellent, necessary addition to the genre." —The A.V.

Club After the bombs fell and shook the walls of Nanjing, the Imperial Japanese Army entered and seized the Chinese capital. Through the dust of the demolished buildings, screams echo off the rubble.